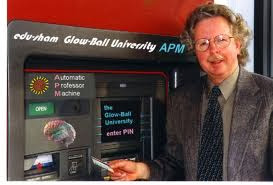 Here are some excerpts from a new book by Jeffrey R. Young, Beyond the MOOC Hype,  an excellent, brief discussion of a variety of programs and projects in MOOC development currently underway.  Young takes note of my send up of technology in education from the skit, "Introducing The Automatic Professor Machine," first done in several in-person performances in the late 1990s.  (It now exists in a two part, low production value video on YouTube: here and here. ) When I first presented the talk at a conference at Penn State (with Ivan Illich in the audience) I observed that while people there probably knew me as a long time technology critic, "I've now had a change of heart."  An audible gasp arose from the audience ....

From Chapter 5: WHY DO SOME EDUCATORS OBJECT TO FREE COURSES?

In 1998, when an earlier boom in “interactive education” was just getting started, a political theorist and technology critic named Langdon Winner staged a performance-art piece meant to expose what he saw as the true motives of online-education proponents.

Wearing a suit with a red power tie, he held a mock news conference where he unveiled a product called the Automatic Professor Machine, or APM, which looked like a bank ATM but could dispense educational products “from preschool to postdocs.” Students would put cash—about $300 per class—into a slot, get a CD-ROM packed with knowledge and homework assignments, then upload their completed work into the machine for automatic grading. It could eventually print out your college degree.

“Beginning this spring, thousands of these attractive consoles will appears in schools, colleges, fast-food restaurants, shopping malls, prisons, and other places where people gather these days,” Mr. Winner said, posing as CEO of EduSham, the fictional company offering this spoof product (the company name was an acronym for Educational Smart Hardware Alma Mater). “Our lectures and seminars will be given only by the top 10 stars in any given scholarly field. After all, why mess around with the small fry?”

Mr. Winner, a political-science professor at Rensselaer Polytechnic Institute, is known for his irreverent style. While he was in graduate school, at the University of California at Berkeley, in the 1960s, he wrote reviews for Rolling Stone, hosted a radio program on an “underground” station, and played in a spoof rock band called the Masked Marauders. In several books over his long academic career, he has critiqued what he sees as the American love affair with technology, which he says blinds people to some of the implications of high-tech inventions.

At the mock press conference, the professor struck the pose of a Silicon Valley entrepreneur. In character, he made light of the implications of his invention, arguing that the Automatic Professor Machine would make traditional professors obsolete. “Today’s educators may think that they are crucial to education, that their presence is required. But, my friends, they are simply mistaken,” he deadpanned. “By comparison, think of the elevator operators decades ago, who probably rejoiced when automatic controls came into elevators. They said, ‘Oh, wonderful, now our jobs will be more interesting and more fun. We’ll be able to talk to the people on the elevators. We’ll have less physical to work to, and so forth.’ Well, we know what happened  to the elevator operators. At EduSham, we view the elimination of the old practices, the old structures, and particularly the old personnel as good news!”

Like a good Saturday Night Live skit, the satire dragged on past the easiest parts of the joke, taking the product idea to its extreme. The EduSham president announced plans to use wearable computing technology to somehow transfer knowledge to students through clothing, and he showed a picture of a prototype: a T-shirt with a computer mouse draped over the shoulder. “In a future,” he proclaimed, “the T-shirt will simply be your alma mater.”

“On all sides,” he concluded, “we see a frantic but halfhearted scramble by those at old-fashioned institutions to catch up to the dynamism of this extraordinary historical situation. At EduSham, we look upon all of this with amusement, watching as teachers and administrators scramble to sacrifice their long-held principles and practices in a frantic quest to catch up and survive in the era of digital communications.”

I was still a relatively new reporter at The Chronicle when that ed-tech boom was going, and I covered what seemed like a loud and widespread backlash against online education. Many professors pushed back against the ideas that parts of teaching could be replaced
with computers and that degrees were products that could be digitized like so many other goods and services.

[Mr. Young goes on to summarize some of the key controversies and criticisms of MOOCs and eventually moves on to a telephone interview done early last fall.]

If a big advantage of MOOCs is the large data sets of student behavior, who will get to see that information to learn from it? And will the privacy of students be protected? Curtis J. Bonk, a professor of education at Indiana University at Bloomington, said he worried that MOOC providers could end up selling student data to companies that are “soliciting things you didn’t mean to be getting.”

As all of these issues have begun to get attention, satire has inevitably made its way into discussions of MOOCs.

Laurie Essig, an associate professor of sociology and women’s and gender studies at Middlebury College, put forth her own proposal for the future of high-tech education on The Chronicle blog The Conversation. Her vision: massive open online administrations, or MOOAs.
“Think about it: MOOAs are the perfect solution to the rising cost of higher education,” she wrote. “We take superstar administrators and let them administer tens, maybe even hundreds, of thousands of faculty at a time. The Ivy League and Nescac colleges could pool their upper management as could, say, Midwestern state colleges that start with “I” or “O.”

And so I called Mr. Winner, the technology critic who had staged the Automatic Professor Machine skit more than a decade ago, and I asked him what he thought of MOOCs.

He consulted his alter ego, the president of EduSham, which had made the APM. “His model now is that of hydrofracturing, or fracking, education,” Mr. Winner said. “What you do is you pump in course materials and lots of volatile rhetoric, and once you’ve broken up the substrata of the educational institutions, then you pump out whatever value you can.” EduSham apparently offers MOOCs but calls them massive obnoxious online commodities.

Why hasn’t Mr. Winner been more vocal in his concern? “I really see MOOCs as just the latest version of a very old story,” he said. “It’s very interesting that there’s no museum of the history of technology in education. I think the reason is that nobody wants to remember what happened five years ago or 15 years ago, because these things have always been failures.”

“We package this stuff as if you go through a set of courses and that’s what matters,” he said of traditional colleges. “But I always tell my students at Rensselaer Polytechnic Institute, I say if you leave this place without a network of friends and colleagues, people your age with interest in the fields of knowledge and practice that you have mastered, and you leave this place without three or four faculty who would respond to a letter-of-recommendation request saying whether this person is any good, then you’ve wasted your money. Because education is not just about what you have in your head, but some precious things that are not very well understood.”

Those not-very-well understood qualities can’t be translated to a MOOC, he argued. “They create this one-size-fits all model—the idea that education is basically a matter of information transfer from point A to point B. That fundamentally misunderstands what education is about, which is human relationships.”