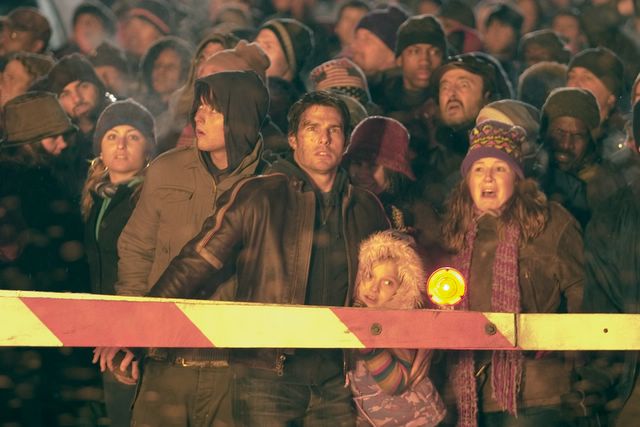 "That's not an alien tripod! It's the the Lafarge cement plant burning TIRES!"

Much of the fire and smoke shown in Spielberg's "War of the Worlds" happens in the lovely town of Athens, New York on the Hudson River. It's the place where the ferry boat is attacked by alien tripods. While all that smoke vanishes at the film's conclusion, some much more noxious fumes are being planned for an old, decrepit cement plant in nearby Revena. The Larfarge company proposes to kock a hole in the smokestack and burn about 5 million tires a year. Since I live downwind from the stack, I'm concerned, as are many of my neighbors in Columbia, Greene and Rensselaer Counties. Smelled any burning tires recently? (There's no end to the ambitious, money-making ideas for destroying the region and our lungs.)

By Patrick Cain
Special to the Times Union

ALBANY--After two years of reviews and revisions Lafarge North America has
filed a new application with the state Department of Environmental
Conservation to burn 4.8 million tires annually at its Ravena cement plant.

The next step is to collect public sentiment as part of the approval
process. The proposal is open to public review until Sept. 2.

The application for a permit is available in the Albany office of DEC, and
in the libraries of Ravena and Castleton, which is downwind of the plant. A
public information session on the application is scheduled at 7pm, Aug. 4,
at the A.W. Becker Elementary School, 1146 Route 9W, Selkirk.

"People need to let us know what they think of the application," said
William J. Clarke, Department of Environmental Conservation region-4 permit
administrator.

Earlier this year the company filed an application to burn 6 million tires
but has since lowered its request. If passed, the 4.8 million tires would
reduce the amount of coal and coke burned by 35,000 tons and serve as 20
percent of the energy used at the plant.

Friends of Hudson, the 4,000-member group that mobilized against St.
Lawrence Cement plant's proposal in Columbia County, are taking aim against
Lafarge because of environmental concerns.

Ralph J. Cicerone, president of the National Academy of Sciences, testified to the Senate Energy and Natural Resources Committee this week, arguing that global warming is real and a consequence of human activity.

"Carbon dioxide in the atmosphere is now at its highest level in 400,000 years and it continues to rise," said Cicerone, an atmospheric scientist who left as chancellor of University of California-Irvine to become academy president this month. "Nearly all climate scientists today believe that much of Earth's current warming has been caused by increases in the amount of greenhouse gases in the atmosphere, mostly from the burning of fuels."

* * * * * * * *
[Who do these scientists think they are anyway, using systematic observation, scientific theory and critical thought to question the cherished beliefs of George W. Bush? And what is this "National Academy," some kind of liberal advocacy outfit? Perhaps some Rove style intimidation (cut their research funding?) will bring these guys back to the yellow cake truth as revealed to our great leader. - LW]
Posted by Langdon at Friday, July 22, 2005 1 comment:

A new study by ecologist David Pimintel at Cornell (shown above) and engineering prof. Tad Patzek of U.C. Berkeley indicates that "There is just no energy benefit to using plant biomass for liquid fuel....These strategies are not sustainable." Their method involves calculating the energy inputs used in producing fuels from corn, switch grass and other kinds of biomass. On that basis, more energy is expended than produced.

It's been more than more than thirty years since the "energy crisis" of the 1970s and we still have not achieved much clarity about how to evaluate proposals for alternative energy.
Posted by Langdon at Wednesday, July 20, 2005 1 comment:

A peculiar wrinkle from investigations on the London bombings is speculation that terrorists have been recruiting young technical professionals in the UK. If nothing else, this reinforces the need to teach engineers and IT students skills of open-minded, critical thinking along with the powerful technical disciplines they learn. If, in fact, members of al-Quaeda has spotted this Achilles heel within modern higher education, they are even more clever than we’d suspected.

From “Leaked No 10 dossier reveals Al-Qaeda’s British recruits,” by Robert Winnett and David Leppard in the Times OnLine:

A network of “extremist recruiters” is circulating on campuses targeting people with “technical and professional qualifications”, particularly engineering and IT degrees.

Yesterday it emerged that last week’s London bombings were a sophisticated attack with all the devices detonating on the Underground within 50 seconds of each other. The police believe those behind the outrage may be home-grown British terrorists with no criminal backgrounds and possessing technical expertise.

* * * * * *
[While we're at it, why not throw in a class or two on basic ethics, perhaps discussing upon the moral depravity of killing innocent civilians. Of course, this question would be equally relevant for those now in charge at the Pentagon and White House. - LW]
Posted by Langdon at Thursday, July 14, 2005 2 comments:

Here via Xymphora are complementary stories about the death of the American Dream of education, jobs and prosperity and the rise of that dream elsewhere.

Stories of this sort used to be a major focus in the press and among progressive policians, but they are seldom mentioned these days (hey, let's talk about abortion, gay marriage, Michael Jackson, the latest abduction, etc.) The idea that they key to economic strength is tax breaks for the wealthy rather than strong social support for working people is a myth that, along with fantasies of empire, is rapidly erroding the economic, political and cultural fabric of the U.S.A.

The millions of people who enjoyed the Live 8 concerts in person and on television yesterday were repeatedly urged to visit the organization's website and sign the ONE Declaration calling for action "to help the poorest people of the world overcome AIDS and extreme poverty." Although certainly informed by noble intentions, the policy approach outlined by Bob Geldol, Bono and their colleagues needs a close second look.

As George Mobiot points out in a recent essay, the exact terms for the debt relief proposed for African nations often comes with conditions that involve privatization and other neo-liberal "reforms" that could create more trouble than the debt itself. The spectacle of rock stars and movie idols making nice with the likes of Tony Blair and Georeg W. Bush, should give us pause. It may be that the world's poor are being sold down the river yet again, as the music plays on and we all cheer wildly.

Mobiot writes of the "two bards," Bono and Geldof:
"I understand the game they're playing. They believe that praising the world's most powerful men is more persuasive than criticising them. The problem is that in doing so they turn the political campaign developed by the global justice movement into a philanthropic one. They urge the G8 leaders to do more to help the poor. But they say nothing about ceasing to do harm....

"Listen to these men - Bush, Blair and their two bards - and you could forget that the rich nations had played any role in Africa's accumulation of debt, or accumulation of weapons, or loss of resources, or collapse in public services, or concentration of wealth and power by unaccountable leaders. Listen to them and you would imagine that the G8 was conceived as a project to help the world's poor.

"I have yet to read a statement by either rock star that suggests a critique of power. They appear to believe that a consensus can be achieved between the powerful and the powerless, that they can assemble a great global chorus of rich and poor to sing from the same sheet. They do not seem to understand that, while the G8 maintains its grip on the instruments of global governance, a shared anthem of peace and love is about as meaningful as the old Coca-Cola ad."