Song for our Great Depression: "Apple Days Are Here Again" 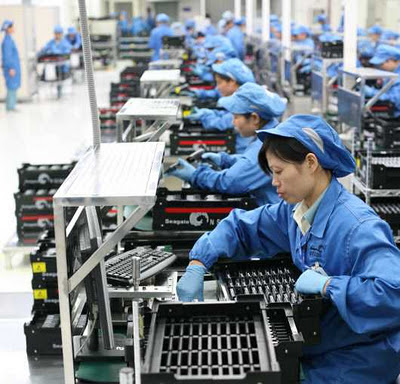 Workers at Foxconn making Steve Jobs' wonderful iPhone
During one of those end of the year 2011 wrap-up programs on the BBC, several CEOs of major corporations were asked to give their predictions for the year ahead and years beyond.  Would the U.S. and Europe emerge from what amounts to a persistent recession, or are there better days ahead?  Their predictions, made in separate interviews, varied in many of the specifics, but they were basically upbeat and looked forward to economic “recovery” within the next year or so.
A recurring theme in the businessmen's statements caught my ear.  Here’s my rough paraphrase and summary:  “The future of a vibrant economy depends on new ideas and technological innovations, ones that will produce new levels of wealth and well-paying jobs in the decades just ahead.  Look at Apple, the iPhone and iPad, for example, that’s the model for the new economy.  That's where we should be looking.”
In interview after interview the good news was: Apple, Apple, Apple, Apple, Apple.   Apparently, there are going to be dozens, maybe even hundreds of Apples, new corporations with jazzy new products to produce and sell, making us all rich once again.  I was struck by the univocal conclusion with its one lonely exemplar. All of this came, by the way, at the same time that the news was full of hyperventilating praise for the recently deceased Steve Jobs and the economic wonders he'd generated during his career.
Today's New York Times runs a story, "How U.S. Lost Out on iPhone Work," by Charles Duhigg and Keith Bradsher that casts a shadow over these happy fantasies.
Apple employs 43,000 people in the United States and 20,000 overseas, a small fraction of the over 400,000 American workers at General Motors in the 1950s, or the hundreds of thousands at General Electric in the 1980s. Many more people work for Apple’s contractors: an additional 700,000 people engineer, build and assemble iPads, iPhones and Apple’s other products. But almost none of them work in the United States. Instead, they work for foreign companies in Asia, Europe and elsewhere, at factories that almost all electronics designers rely upon to build their wares.
“Apple’s an example of why it’s so hard to create middle-class jobs in the U.S. now,” said Jared Bernstein, who until last year was an economic adviser to the White House.
“If it’s the pinnacle of capitalism, we should be worried.”
*  *  *  *  *  *  *  *
The Times story pulls away the curtain from one of the central, delusional happy talk American narratives of ourtime.  We are asked to put our faith in "innovation" and in wonderful new corporations that will bring the return of prosperity by generating high tech product lines that, presumably, will be made by American workers and thereby restore prosperity to the land.  But what about all the contractors and sub-contractors and sub-sub contractors hiring hundreds of thousands of low wage laborers at places like Foxconn in China?  The delightful tales of a "new economy" just ahead never bother to mention such dreary details.  As always, people in the fading U.S. middle class  are urged to be more forward-looking and "optimistic."
In that bubbly spirit, we should rewrite the lyrics of the Depression era song, "Happy Days Are Here Again."
Apple days are here again
The skies above are clear agin
So let's sing a song of cheer again
Apple days are here again!
Posted by Langdon at Sunday, January 22, 2012 2 comments:

From Amsterdam: a musical play about Captain Beefheart 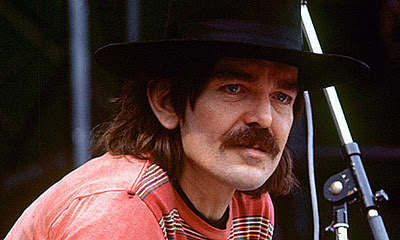 The legacy of Don Van Vliet, his art and music, endures in a number of ways, including occasional tribute concerts, especially those of Gary Lucas, former Magic Band member and now noted jazz musician.  For both new audiences and older fans, the internet is well stocked with Beefheart recordings (both legit and bootleg), videos, and memorabilia along with photos of Don's paintings and drawings, his sole artistic pursuit from the early 1980s til his death in December 2010.

Recently, I received news of a Dutch musical theater piece, "Low Yo Yo Stuff," based on the life of Captain Beefheart and staged a couple of weeks ago in Amsterdam.  Ferry Rigault, an acquaintance of mine from the early 1970s with whom I attended a Beefheart concert and after concert drinks with Don, alerted me to the production.  Here (slightly edited) are his comments on what he saw and heard.


Mr. Rigault was nice enough to send along a video promo clip for the play along with two songs tastefully and energetically recreated by by Frank Lammers and his version of the Magic Band -- "I'm Gonna Booglarize You, Baby," and "Electricity."

Another YouTube treasure Ferry enclosed was a television appearance Captain Beefheart and a rather tacky band made during his tour of Europe in 1973 (or was it 1974).  This a period in which the fabulous Magic Band of "Trout Mask Replica" and subsequent albums had completely fallen apart, leaving Beefheart and his Las Vegas manager with a group composed of L.A. and Vegas studio players.  Don seemed humiliated, but he slogged on if only to keep the money pouring in.  (Take a look at the cover of "Unconditionally Guaranteed" from that period in his career.)  At the Concertgebouw concert, Don asked his clarinet player (yes, clarinet player) to do a dixieland solo on "Sweet Georgia Brown" at one point and then, several songs later to play the damned thing again!

The treasure here is an appearance Don made on a Dutch comedy television show during the same tour.  He walks on stage with two bumbling comedians as a young woman is singing a ballad.  After some rather lame jokes by the Dutch buffoons, Beefheart lip syncs and mugs a song, "Upon the My Oh My," from "Unconditionally Guaranteed," drawing out the autobiographical pathos in the lyrics: "Tell me, good Captain, how does it feel, to be driven away from your own steering wheel? Upon the My Oh My ...."

What's wonderful about the video is that your can see very clearly Van Vliet's characteristic posture, body language, impish facial expressions, and, well, his attitude as he moved along the always awkward boundary between his private life and public persona.  What was it like to be in his presence?  The video will give you a pretty good taste.  It ends with Don walking over to keyboard player on the set. "Can you play 'Yesterday'?" he asks.   The pianist plays the song as Don starts whistling, which he always did by inhaling, his mouth half open.  Check it out below.

That's my contribution to internet Beefheart for today.  Keep listening!

As a little boy growing up in 1950s California, I learned all about the evils of Communism, especially those perpetrated by the arch enemy of the "free world," the U.S.S.R.   Although there were many features of the Soviet system that my teachers and the media identified as horrifying, there was one that always stuck in my mind -- the "fact" that people in the Soviet Union were encouraged -- encouraged! -- to turn in any neighbors, colleagues at work or family members who were violating the principles of Communism in any way.  Even little children, I was told, were expected to rat on their parents if they suspected them of any transgression from Soviet principles.  "What a horrible system," I thought to myself, "asking family members to betray their relatives."

Memories of those lessons returned to me today as I heard a radio advertisement advising listeners to be vigilant against the dread menace of "software piracy."  While I don't have the exact text of the ad, the gist of it was that employees should inform on any employer whom they believed to be using illegally copied software in the workplace.  As reward for ratting on their boss, the ad promised a handsome cash reward.

Afterward I tracked down the sponsor of the campaign, the Business Software Alliance.   Its web page describes the purposes and methods of this ambitious program.

"The BSA has been aggressively marketing financial incentives to disgruntled employees to make anonymous software piracy tips against their employers with reward payments. Based on the number of radio ads in September, Los Angeles. #1, Chicago #2, New York #3, San Francisco #4, and Dallas #5 targeted markets, in their national “whistleblower” radio campaign according to statistics provided by AdScope."
* * * *

What an opportunity to earn some extra cash!  Not only can I enjoy spying on my colleagues in various firms and on university campuses, but I can also refresh some cherished childhood memories.  All that talk about the paranoia and cultural repression imposed by Joseph Stalin will no longer be just an abstraction, but a living part of everyday life.

Oh, thank you, Business Software Alliance, for reviving this crucial part of modern political culture -- terror, surveillance, betrayal of friends and family, and the renewed affirmation of what truly matters -- the rights of private property over everything else!