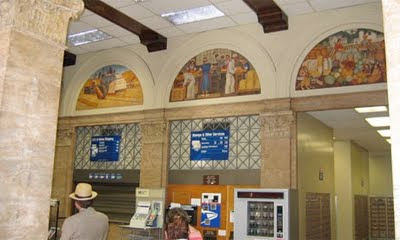 Cultural historian Gray Brechin, head of the Living New Deal Project, reports the selling off of some of America's most important public places -- hundreds of post offices built during Franklin Delano Roosevelt's New Deal.  Brechin's article in the Guardian laments the auction and possible destruction of many of these lovely, useful buildings, casualties of the manic budget cutting so characteristic of the Obama/Tea Party/Republican era -- the new "Dying Rotten Deal" perhaps?  (My words not Brechin's)

Gray's evocative essay show the price we pay for losing an enduring connection to history, the public arts and civic culture as our co-called "leaders" stampede to comply with demands of today's barbarian oligarchs.

"Roosevelt shared with other New Dealers a considerably more expansive notion of what the US could achieve. He forecast that "one hundred years from now, my administration will be known for its art, not for its relief." The New Dealers envisioned a new Renaissance. Its successors are knocking that legacy down to the highest bidder, and with it goes what we once were and might yet be."
Posted by Langdon at Tuesday, August 02, 2011