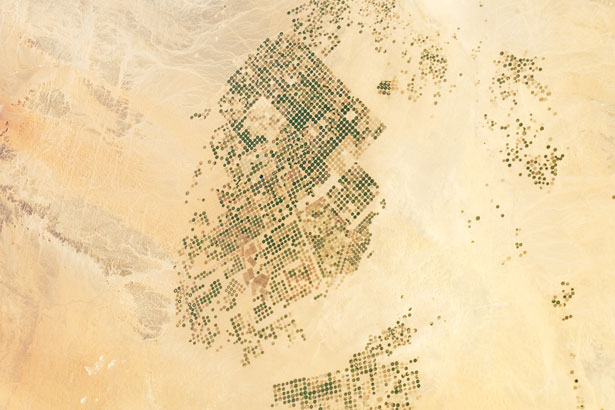 (NASA photo of irrigation patches in the Arabian peninsula, verdant and dry)

About fifteen years ago I took part in a conference on the future of space exploration held at the Rice University campus in Huston.  There were a number of talks by philosophers of technology along with a colorful presentation by Story Musgrave, American astronaut who had traveled into space on six NASA missions.  My own contribution stressed the need for nations of the world, including the U.S., to go beyond the breast thumping nationalism and militarism that had characterized the early decades of “the space race.”  “Why not make space a truly universal human concern, rather than a demonstration of a particular country’s power and prestige?” I asked.

Musgrave, a brilliant engineer, MD, philosopher, poet, and scholar with wide-ranging interests, is renown as the person who flew on the Space Shuttle Endeavor in 1993, going outside the ship to repair equipment problems in Hubble Telescope, glitches that had rendered the satellite basically useless.  His main contribution at the conference was to show and comment upon photographs he had taken during several of his flights in orbit.  Among the scenes were panoramas of whole continents, oceans and islands, cities lighted at night, lakes, clouds, and an array of human-made systems of dwelling, energy and transportation.  One especially astonishing sequence of slides showed a lightning storm spreading across a vast landscape.  “From space one can clearly see,” he noted, “that lightning bursts are not singular events, but systematic patterns fanning out from a center along a chain of electrical points.” (1)

Musgrave explained that his use of photography in space over the years stemmed from an insight that dawned on him during his first flights into the stratosphere.  As he worked with his fellow astronauts, he noticed how few seemed genuinely interested in the marvels that surrounded them as they circled Earth.  Some of them scarcely bothered to look up from the instruments and displays they were monitoring.  Just outside the windows of their satellites were the most extraordinary vistas ever witnessed by a human being.  “But many of my colleagues were so thoroughly involved with their assigned routines that they didn’t take time to gaze into universe that beckoned.”

Appalled by this odd, unnecessary convention, Musgrave quietly rebelled.  As he told our gathering, “I cultivated a particular habit.  Wherever I was in orbit inside the capsule or outside in a space suit, whatever it was I had to accomplish, I would remind myself every 90 seconds or so: Story, look around!”  In that spirit, he made it his practice to pause, turn his eyes from the equipment for a moment, and gaze out at the stars and down toward the Earth.  He persisted in doing this even during the intensive, delicate work floating weightlessly to install new electronics packages for the Hubble. “Why should I avoid taking a moment to gaze into the universe?” he exclaimed.  “After all, I was one of the few persons in all of human history to have had this wonderful opportunity.”

During our panel discussion of the future of space travel, Musgrave expressed some sympathy with the general argument I’d made about the need to reject the Cold War patriotism and military ideology of the first generation American space programs.  Perhaps he was just being polite, but he offered no objection to my provocation that the earliest steps in U.S. space initiatives were an afterthought, attempts to glamorize the production of intercontinental ballistic missiles.

My subsequent reading about Story’s life and work made it clear that, in fact, his experience of space travel had always been intensely spiritual, informed by his readings in philosophy poetry, and natural history including the classics of European romanticism, the works of American transcendentalists -- Emerson, Thoreau, Whitman, and others -- sensibilities expressed in some 300 poems about space he’s written over the years.

In a 1997 interview for the Academy of Achievement, Musgrave took care to emphasize the literary and philosophical roots of his vision.  “Whitman expressed the whole universe in his poetry and in his catalogues. That attitude almost defines what we call American romanticism, or American transcendentalism. I feel particularly close to them, because I am now out in the universe. I'm in a position to see nature from another point of view, to be outside the earth and see the big picture. To have an absolutely clear shot at the skies and to see stars that you can't see from down here, Magellanic clouds, auroras, a new perspective of nature.... It's clear to see why I like the English romantics and the American transcendentalists. I like their poetry as literature but also, from a philosophical point of view, I have very close ties to them.” (2)

One of the slides he showed at the conference left strong, lasting impression on me, enough so that I’ve used it -- along with his “Story, look around!” maxim -- in my classroom teaching over the years.  From a vantage point high above the Earth, the photo showed the Arabian Peninsula in bright daylight, revealing massive arrays of little green circles in precise geometrical patterns within the yellow desert terrain.  “What you see here,” he explained, “are systems of irrigation using gigantic water sprinklers that move slowly in circular swaths, watering fields of wheat and other agricultural products.” Clearly, the dozens of green circles were expressions of one of the signature projects in the “conquest of nature” celebrated during the mid-twentieth century: “making the deserts bloom.” He paused for a moment and then quietly mused,  “It took tens of thousands of years for water to gather in the deep aquifers that these farms now pump to the surface.  It will take only twenty years to exhaust them.”  And with that he clicked on to the next slide.

Musgrave’s comments are echoed in a series recent scientific studies and news reports about one the excesses of contemporary civilization -- the increasingly frantic quest to extract water from the world’s remaining aquifers.  Many of the green circles from satellite photos of the Arabian Peninsula have already turned brown as the underground wells that quenched them have dried up, never to be replenished.  According to recent estimates, four fifths of the water in Saudi Arabia’s wells have been tapped out.  Although the country has built desalinization plants to provide water from the sea, the cost of $1 per cubic meter is prohibitive for agricultural applications.  A desperate alternative has been to secure lands and water for Saudi agriculture at distant locations including the headwaters of the Nile River in Ethiopia. Projects of this kind have repeatedly brought the Saudis in conflict with local populations unhappy with the coming of billionaire oil sheiks. (3)

A similar predicament now faces my home state of California.  Four years of persistent drought have eliminating much of the water that once flowed in abundance from rains and snowmelt in the Sierra Nevada mountains, forcing farms, towns and cities to draw upon deposits of water from underground wells and deep aquifers.  According to the March 2015 estimate of NASA hydrologist Jay Famiglietti, “Right now the state has only about one year of water supply left in its reservoirs, and our strategic backup supply, groundwater, is rapidly disappearing. California has no contingency plan for a persistent drought like this one (let alone a 20-plus-year mega-drought), except, apparently, staying in emergency mode and praying for rain.  In short, we have no paddle to navigate this crisis.” (4)  An additional unhappy surprise is that as water is pumped from the ground to supplant customary surface supplies, some communities have experienced the sinking of large patches of land as subsurface caverns give way.

The larger picture of events in Arabia and California is offered in a comprehensive scientific study published earlier this year, warning that many of the world’s largest and most crucial sources of underground fresh water are now in steep decline.   From 2003 to 2013 NASA’s GRACE satellites measured changes in the Earth’s gravitational pull, ones caused by reduction in the mass of water from the world’s aquifers.  (5)   As reported by the Washington Post, “Twenty-one of the world’s 37 largest aquifers – in locations from India and China to the United States and France – have passed their sustainability tipping points, meaning more water was removed than replaced during the decade-long study-period....” (6)  Roughly 35% of all water used by people around the globe comes from underground sources of this kind.

Among the troubles that afflict our planet today are the alluring power fantasies left behind by the era of reckless modernity of the twentieth century.  Some of the more prominent lingering delusions assume a limitless supply of resources crucial for economic growth, consumerist materialism and “the good life,” including what were long assumed to be the “free” and “inexhaustible” resources of fresh water from the skies and in our lakes, streams and rivers.  To some extent the worlds’ growing awareness of resource depletion, global climate disruption and other features of civilization's assault upon Earth’s biosphere arose from observations and measurements gathered by space satellites and those skillfully employ them.  Today, as the world's people seek new policies and creative alliances to address these calamities, the availability of good scientific evidence from satellites and elsewhere is, of course, absolutely crucial.  But for a generation inclined to stare passively, even obsessively into video displays and smart phone screens, the wisdom of Story Musgrave’s astronaut invocation seems more relevant than ever: “Humanity, look around!"

(1)  The quotes from Dr. Musgrave I offer here are from my memory and should be understood only as, I hope, faithful reconstructions of his remarks at the Rice conference.

(4)  Jay Famiglietti, “California has about one year of water stored. Will you ration now?” Los Angeles Times, March 12, 2015.  http://www.latimes.com/opinion/op-ed/la-oe-famiglietti-drought-california-20150313-story.html