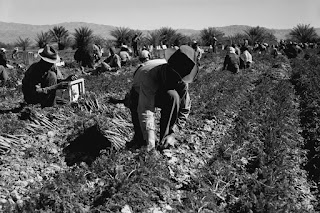 Migrant farm workers, many of them "braceros," from the 1940s
(Getty images)

As a central coastal California native, the presence of "migrant workers" was a fact of my childhood.  During the worst winter storms, our church in San Luis Obispo would gather and deliver canned goods and other necessities for workers who couldn't go to the flooded fields to earn a living.  Yes, the mood was that of charity and pity, but it also contained an element of respect for people who have to do society's hardest labor.  Seeing first hand how the workers lived made a deep impression on me.  I  was fortunate as well to have parents who stressed a simple message of human equality.  An often repeated phrase around our house was, "You're no better than anybody else, and nobody is any better than you!"

Much later when I was in graduate school in the middle 1960s, a friend and I made a tourist visit to Mexico.  At the Tijuana border we stood in line and struck up a conversation with a friendly "bracero" in his late 30s who told us about his work back and forth across the border, about his family and community.  As we moved to the Mexican side of the border we two long haired "hippies" were approached by police who started some aggressive questioning. "You've come for the drugs, si?"

At that point the bracero just behind us stepped forward and firmly let it be known that this approach was not acceptable.  "They're friends of mine," he said.  The police relented.  On the train south we talked with the man further and he invited us to visit his village, Juanocitlan (sp?), when we ultimately reached Guadalajara. So we took the long bus ride into the hills, stayed in his home a couple of days, met his wife, kids, extended family and many people in the village.  Today, it is not possible for me to listen to all the vile blather about immigrants without remembering that experience with a "wetback."
Posted by Langdon at Friday, November 13, 2015 16 comments: