Hitler finds out he's not admitted to Design program 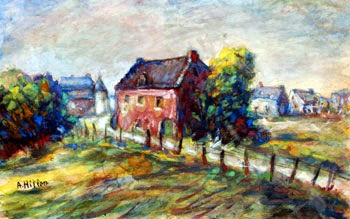 Recently, in my class on Design, Culture and Society at Rensselaer, we've been talking about humor and creativity.  I made the classic argument that a joke or comic expression of some kind typically springs forth when two or more seemingly unrelated frames of meaning temporarily collide to produce a laugh or a smile.  The larger point is that creativity in a much broader sense can also happen during collisions of that sort.  I noted that in New York City and elsewhere there are literally boiler rooms where talented people sit around every day engaged in crafting these events, writing and testing dozens of amusing lines for the comedians on late night television shows.  As I understand it, they start with the daily news and start exploring points of connection, an odd variety of mass production.

With these thoughts in mind,  I happened upon a version of the famous Internet gag, the "Hitler finds out" program, one that lets anybody write subtitles for a scene lifted from an old movie about Hitler's last day in his bunker in Berlin.  There are probably thousands of versions of this on YouTube.  So I decided to produce one for the class, "Hitler finds out that he's not been admitted to the Design, Innovation and Society program" at RPI.  I included several in jokes from the semester, for example a reference to the three weeks we spent reading and discussing Jeff Wiltse's wondeful book, Contested Waters, a history of swimming pools in the USA.  The script took all of 20 minutes to write and, alas, includes some typos. (You get what you pay for.)

I showed the clip yesterday with brief introduction that took note of the fact that young Adolf Hitler desperately wanted to become a painter, applying twice to an important school of art in Vienna and twice rejected.  I noted that in some ways his dreams matched their own -- the desire to become a successful designer and artist.  "Looking back on it now, it may have been one of the most calamitous turning points in the 20th century.  Think of all the destruction, suffering and slaughter that might have been prevented if only young Adolf has been admitted to art school."  I then observed that "a little known (very little known) fact is that Hitler applied to a forerunner of the program in which you are studying in at Rensselaer."

Of course, the humor in all of these "Hitler finds out..." clips stems from the fact that most Americans can't understand a word of the German the actors on the screen are speaking and the fact that watching Hitler rant and rave about matters from our own time, ones  disconnected from World War II, from the Holocaust and other calamities, produces effects that are sometimes funny.

Here's the clip: Hitler finds out he's not admitted to the Design, Innovation and Society program

Stop the corporate coup at Medialab-Prado! 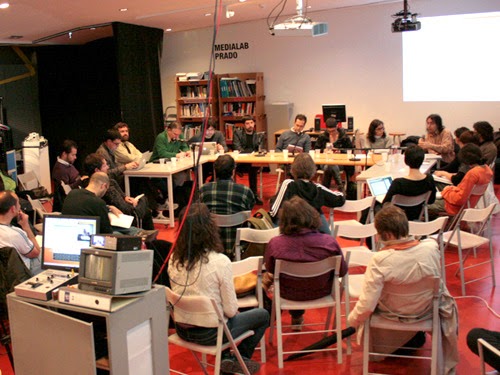 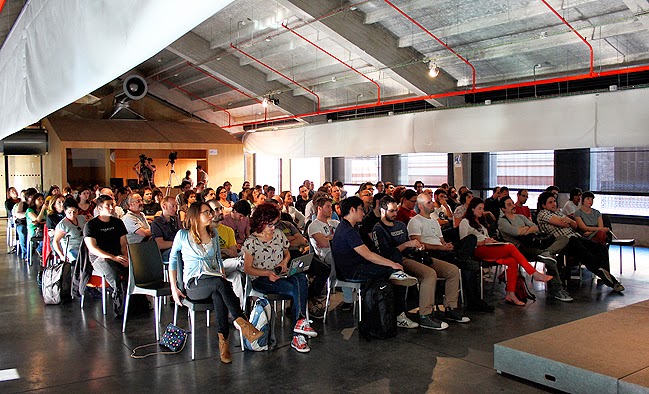 I recently received word that one of the world's most positive and influential centers for the confluence of artistic, technical and political ideas is threatened by a corporate takeover of its building and its very mission.  Medialab-Prado in Madrid has long served as a haven for inventors, thinkers, tinkerers, community activists, students, international visitors, and ordinary citizens.  Over the years it has offered countless workshops, conferences, planning sessions, displays of public art, free wheeling debates, and all manner of lively, ground-breaking activity.  Now the city officials who control the building it occupies have hatched a scheme to turn over its space to a huge telecommunications firm and send the Medialab staff and participants to God knows where.

I first got to know the Medialab in the summer of 2010 while I was visiting Spain on a Fulbright Fellowship, studying how the Internet was changing Spanish politics.  The very best help I received  in finding people to interview, documents to read and events to monitor came from key people at Medialab-Prado. A high point was a dialog one evening in which Yochai Benkler, Javier Bustamante and I discussed the substance and significance of Benkler's ideas about the networked economy and networked public life.  Since that summer I've returned frequently and watched Medialab-Prado grow and expanded its reach into a great many of the 21st century's most vital and hopeful spheres of exploration.

At present I'm trying to learn more about what seems to be a diabolical plot to shove Medialab-Prado and its participants into the dark shadows now enveloping much of the global economy.  I want to scream: "STOP THIS!  STOP THIS FOOLISH SCHEME NOW!"  I know it will take much more than that.  Will you lend a hand in investigating, protesting and seeking alternatives to these hideous, unfolding plans?  Let's get BUSY!

Below is the best information I have, a long message from Jose Luis de Vicente forward to me by the noted historian, Antonio Lafuente


HELP US SAVE MEDIALAB PRADO

Probably many of you have already heard about the serious problems that Medialab Prado is undergoing currently that threatens to stop the activity of the center and maybe, in the mid term, it’s very existence. I know many of you have in the past years taken part in projects and activities there, and have good memories of the institution. Even those of you who have not been there have heard about it and know it’s an interesting, lively place that has made significant contributions to this community. Now it needs as much support from the community as possible to go on.

What it’s going on?

Less than one year ago, Medialab Prado opened, after 5 year of renovation and 6 million Euro of public investment, a brand new building. A new facility that multiplies the size of the previous space by eight and creates all kind of new opportunities, with much better resources.  While the previous space kept the organization relatively under the radar for many in the city council, the new building is really iconic  and has raised the profile of the organization considerably.

Recently we have learned that major telecommunications multinacional Telefónica is looking for a building in Madrid to set up its new startup incubator and has expressed interest in the Medialab Prado building. The City Council, always eager to please, has considered the request and has acknowledged in public that they are under negotiations to satisfy this request. The implications for Medialab Prado are, obviously, quite serious. While they insist in theory on keeping their support for the institution, the reality is that:

The reality is that Medialab Prado could be stuck in a limbo for a very long period, and any development from the possible eviction onwards is at this point very uncertain. The community of users of Medialab Prado has serious concerns that this could start a process that could end with the death of the institution.

To make things worse, it’s important to notice that the building that Telefónica wants to take over has been renovated with public money and with the specific goal of being a cultural facility.

How can you help?

We need to show the City Council in clear terms that Medialab Prado is an important institution that is highly respected and valued internationally. One of the most ironic aspects of this situation is that given the problems they’ve always had to understand what is Medialab Prado -not being a museum, a gallery, or an arts production center- they have never been understood that this is one of the most influential and valued cultural institutions today in Madrid and Spain.

There’s no one better than you to help us to make them understand how important is protecting and preserving the valuable role that Medialab Prado has played in the last ten years. For this, we are requesting any of this three things:

1. A statement or blog post in your own website explaining why you appreciate and value the role of MLP and showing your concern for how the current situation could threaten it. We will link to it and translate it from the website of support we are currently setting up, that should go live in the next hours.

2. For those of you with affiliations with universities, museums or companies, a signed letter of support with the logo of your organization. If you can send it to me I will get it into the website and also printed to send them all together to the City Council.

3. A short video that we can embed in the website, offering your support. Here are some videos from 1 year ago -before the crisis started- that can be used as a model:

That is all. If you have other suggestions or contributions, please let us know. Thanks for helping us keep Medialab Prado alive.