Germans Get Wise to Wal-Mart

After a decade long attempt to crack the German market, Wal-Mart is pulling out, selling its 85 stores and abandoning its plan to become the country's leading retailer. According to a story in My Way, one of the reasons for its astonishing failure is the fact that Germans strongly dislike "some of Wal-Mart's signature features, like stores outside of town centers, employees required to smile and heartily greet customers. . . " Smart people, those Germans!

[The company plans to focus its efforts on greener pastures in China, South Korea and South America where, evidently, phony smiles still have an ineffable charm. -LW]

The New York Times also has a story on this development:

“They walked into a triple-witching hour in Germany,” said James Bacos, the director of the retail and consumer goods practice at Mercer Management Consulting in Munich. “They got into Germany at a time when the whole market was shifting away from their model.”

....Some of Wal-Mart’s troubles stem from the way it broke into the German market in 1998, according to analysts. Instead of starting from scratch, it bought two second-tier retailers, Wertkauf and Interspar, and found itself with a hodgepodge of stores, geographically dispersed and often in poor locations.

The company initially installed American managers, who made some well-intentioned cultural gaffes, like offering to bag groceries for customers (Germans prefer to bag their own groceries) or instructing clerks to smile (Germans, used to brusque service, were put off).

Wal-Mart later went tried German managers, and then appointed David Wild, a former executive at Tesco of Britain, to run its German operations. He tried to win over customers by selling organic meat and produce.

“They found they had some things to learn about the German market, and they did change, but maybe too late,” Mr. Bacos said. ....

[An interesting background condition seems to be that Germans are cutting back on their desire to buy the kinds of junk Wal-Mart sells. Again, from the NYT:]

While consumer confidence has picked up recently, Mr. Bacos said the proportion of household income that Germans spend on retail purchases continues to decline. Profit margins in German retailing are the lowest in Europe.
Posted by Langdon at Saturday, July 29, 2006 1 comment: 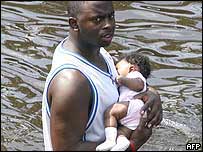 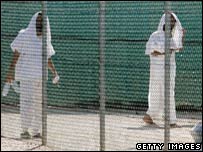 (From the BBC)
UN body criticises US on rights

The US should immediately shut all secret detention facilities used in its campaign against terror groups, the UN Human Rights Committee has said.

The committee called on the US to give the International Red Cross prompt access to those held in such jails.

The UN report also covered the domestic human rights situation in the US.

It urged the government to ensure the rights of poor people and blacks are respected in relief efforts.

Both groups were "disadvantaged" in the wake of Hurricane Katrina, the UN committee noted.

[As a boy in coastal California, I learned that America was the "land of the free" and home, not only of the brave, but also home to worldwide hopes for the realization of human rights. How far we've come. The country seems to have become one vast Milgram experiment. - LW]
Posted by Langdon at Friday, July 28, 2006 1 comment:

From the The Guardian

The safety of passengers on the world's highest - and newest - railway is threatened by cracks, yaks and shifting sands, the Chinese government has admitted.

Less than a month after the opening of the line across the Himalayas to Tibet, it has become unstable in places because the foundations are sinking into the permafrost, railway ministry spokesman Wang Yongping, told the Beijing News today.

Crossing the rugged Qinghai plateau and climbing to 5,072 metres (16,640ft) above sea level, the $4.2bn (£2.3bn) railway was hailed by president Hu Jintao as an engineering miracle for the world. But it was always likely to be harder to maintain than to build. ....

Tunnels were built under elevated sections so that the endangered Tibetan antelope could pass by without danger. But planners have failed to cope with a far less timid and more numerous beast - the yak, thousands of which graze along the tracks and wander across them.

"These form dangers to passengers on the train," Mr Wang said

[In this situation, I favor the yaks, the sand and the Tibetans. The new railroad from China to Tibet is a fine example of a "political artifact," in this case a transportation system whose main purpose is to establish the dominance of the state over a region that has long tried to secure its independence. - LW]
Posted by Langdon at Friday, July 28, 2006 66 comments:

The Empire Strikes Out

A story in the Washington Post, "Waiting to Get Blown Up," goes to the heart of the confusion, disgust and anger that, apparently, many U.S. troops in Iraq now openly express. Sent on a fool's errand by politicians who lied about the reasons for sending them, the soldiers can be counted among our war mongers' victims.

Here are some of their comments:

BAGHDAD, July 26 Army Staff Sgt. Jose Sixtos considered the simple question about morale for more than an hour...."Think of what you hate most about your job. Then think of doing what you hate most for five straight hours, every single day, sometimes twice a day, in 120-degree heat," he said. "Then ask how morale is."

"It sucks. Honestly, it just feels like we're driving around waiting to get blown up. That's the most honest answer I could give you," said Spec. Tim Ivey, 28, of San Antonio, a muscular former backup fullback for Baylor University. "You lose a couple friends and it gets hard." ....

[Spec. Joshua Steffey, 24, of Asheville, N.C.] said he wished "somebody would explain to us, 'Hey, this is what we're working for.' " With a stream of expletives, he said he could not care less "if Iraq's free" or "if they're a democracy." ....

[Spec. David Fulcher, 22, a medic from Lynchburg, Va., who sat alongside Steffey]... "It's like this never-ending battle, like, we find one IED, if we do find it before it hits us, so what? You know it's just like if the cops make a big bust, next week the next higher-up puts more back out there."

"My personal opinion, I don't speak for the rest of anybody, I just speak for me personally, I think civil war is going to happen regardless," Steffey responded.

"Maybe this country needs it: One side has to win. Be it Sunni, be it Shiite, one side has to win. It's apparent, these people have made it obvious they can't live in unity."
Posted by Langdon at Thursday, July 27, 2006 1 comment:

(Mario Savio on the steps of Sproul Hall, probably 1965)


The Renewed Chill on Political Liberty

The following story from the San Francisco Chronicle tells a familiar but nonetheless sad story about political surveillance during the George W. Bush presidency.

A federal Department of Homeland Security agent passed along
information about student protests against military recruiters at UC
Berkeley and UC Santa Cruz, landing the demonstrations on a database
tracking foreign terrorism, according to government documents
released Tuesday.

The documents were released by the American Civil Liberties Union,
which filed a Freedom of Information Act request on behalf of student
groups that protested against recruiters who visited their campuses
in April 2005.

The students were angry when they turned up in the database of a
Pentagon program called Threat and Local Observation Notice, or
TALON, which the government started in 2003 as a way to collect data
that could help stop terrorist attacks. Officials have acknowledged
that the reports on protests should not have been included. …..

What? U.C. students being watched by federal agents? The monitoring of political dissidents is an old story in our “free society”. (See Frank Donner’s Age of Surveillance for an account of several decades of political repression, the Palmer raids, McCarthy era hysteria, and the like.)

During my days as a student in Berkeley it was widely known that and meetings and marches were closely monitored. At noon rallies outside the Sproul Hall administration building, speakers would sometimes ask that we turn and wave to the FBI photographers perched on the roof of the student union. G-men assigned to follow leaders in the student movement would knock on the doors of activists’ homes and introduce themselves, a way of intimidating people. An insidious consequence of this infringement on our liberties was to undermine the ability of peace groups and other political organizations to operate without fear of agent provocateurs their midst. During the late 1960s these fears developed into full blown paranoia. The investigations of FBI and CIA abuses Senator Church and others during the mid-1970s exposed these vile practices to the light of day. Alas, the selection of Bush and Cheney picked up the rock under which these vermin had been hiding and put them back to work.

“What are those traitorous students and Quakers up to?”
“We’ll get right on it, boss.”
Posted by Langdon at Friday, July 21, 2006 1 comment: