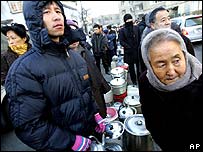 An explosion and major chemical spill last week near city of Harbin, China sent one hundred tons of benzene and other toxic chemical into the Songhua River from which Harbin and other towns and cities in the region take their drinking water. For days following the accident, local and national officials denied that anything dangerous had happened. A friend of mine, Prof. D. Wang, teaches philosophy at the Harbin University of Science and Technology and sent the following observations (reprinted with permission).

"Generally speaking, everything here has not been going too bad these days, thanks to plenty of water mobilized to this city in time. Certainly, a panic spread at the beginning of the accident. All middle and primary schools in the city have been closed until 30th this month, and some people had departed in panic with the rumor of forthcoming earthquake around Harbin. The day before yesterday, the city's water supply system has run again, but it was noticed that the water could not be drunk until the next noticement releases. Now it seems that everything will go as usual from tommorrow.

"The accident has drawn much attention not only of the people in this country but foreign governments and people as well. The case highlights how failures of such a social-technological system could result a public crisis in such a country in which the "bad" facts are often disguised by interested parties. Many comments on the issue in BBS of my university has been given to such topics as inadequate site of the chemical plant, disguise of the disaster information, lack of a reaction mechanism of public crisis, and so on. Knowing the thing could be otherwise if there were robust political arrangements in advance, people are looking forward to substantial improvements resulted from the accident.

"The long range outcomes need to be carefully observed, and the event surely is a good example showing the political aspect of technology and engineering."

[Of course, we have many similar problems in the USA at present -- a government that does not want to pay attention to "bad" facts. The whole situation in Iraq is one example, along with the Bush administration response to Hurricane Katrina. An unfortunate trend in the early 21st century is the attempt to impose political will over recalcitrant facts. - LW]

"There is good news to tell you. My city's water system began to run as usual in the morning yesterday (some areas in the day before yesterday), and tap water could be used in safety, namely, up to the national standards of drinking water. In addition, I was told that a new water supplying system would be built up next year, using water in a dam tens miles away from the city rather than polluted water of the Songhua River (e.g., fishes in the river could have rarely been taken as food due to Hg contamination since the early 1980s). In fact, the national drinking water standard of China itself is one of the sources of problems, which issued in 1985, far behind the standards of the States or Europe. It was said that new standards could possibly be issued by the end of this year. I am not sure whether the Harbin Accident may speedup the birth of the new standards or not. But it is certain that the standard itself has to be a social and political product."
Posted by Langdon at Wednesday, November 30, 2005 5 comments: