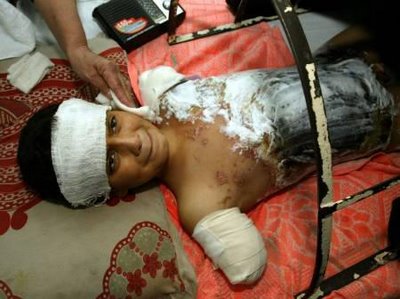 Again in the forefront of every backward step:
U.S. refuses to sign ban on cluster bombs

OSLO, Norway (AP) — An Afghan teenager who lost both legs in a cluster bomb explosion helped persuade his country to change its stance and join nearly 100 nations in signing a treaty Wednesday banning the disputed weapons.

Afghanistan was initially reluctant to join the pact — which the United States and Russia have refused to support — but agreed to after lobbying by victims maimed by cluster munitions, including 17-year-old Soraj Ghulan Habib. The teen, who uses a wheelchair, met with his country's ambassador to Norway, Jawed Ludin, at a two-day signing conference in Oslo.

[And for what reason, I wonder, does the U.S. insist upon using one of the most unambiguously evil devices mankind has ever devised? The story continues ..... ]

The U.S., Russia and other countries refusing to sign the treaty say cluster bombs have legitimate military uses, such as repelling advancing troop columns.

Cluster bomblets are packed by the hundreds into artillery shells, bombs or missiles, which scatter them over vast areas. Some fail to explode immediately. The unexploded bomblets can then lie dormant for years until they are disturbed, often by children attracted by their small size and bright colors.

The group Handicap International says 98 percent of cluster-bomb victims are civilians, and 27 percent are children.

The teenager mentioned in the news story is not the one I've pictured. The photo comes from journalist John Scully's web site, Am I Dead Yet?

Email ThisBlogThis!Share to TwitterShare to FacebookShare to Pinterest
Labels: children, cluster bomb, tax dollars at work
Human flesh search engines -- another dark side of the internet

The Obama campaign's use of the internet to mobilize positive, political participant is one of the brighter chapters in the Net's presence as a contribution to public life. Now from China comes some awful news about ways in which "human flesh search engines" are used by aggressive moralists to hound people suspected of wrongdoing.

From the Christian Science Monitor:

Beijing - Some call it a weapon in the hands of a righteous army, forged so that wrongdoers might be smitten. Others say it simply allows a mob of vigilantes to publicly vilify and humiliate anyone they choose to pick on through grotesque invasions of privacy.

Either way, the peculiarly Chinese Internet phenomenon known as the "human flesh search engine," a citizen-driven, blog-based hunt for alleged undesirables, claimed a fresh victim this month when a mid-ranking government official lost his job.

Accused of accosting a young girl, Lin Jiaxiang found his name, address, phone number, and workplace plastered all over Chinese cyberspace for 250 million Internet users to see, and his alleged crime the subject of hundreds of insulting blog postings.

Mr. Lin might be thought to have gotten his just deserts, especially since the police refused to prosecute him because he'd been drunk. Grace Wang, however, a Chinese student at Duke University, was outraged when netizens back home, offended by her efforts to mediate a campus dispute between pro-Tibetan and Chinese students last March, tracked down her parents' address and emptied a bucket of feces by their front door. . . . .

It's easy to imagine mud slinging campaigns of this sort in the U.S. as well.