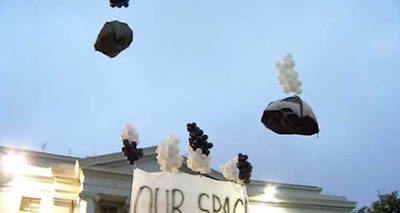 I'm proud of my alma mater.  Here's the story.


Quick-thinking #OccupyCal students “pitched” tents in the sky after police cleared their camp at the University of California at Berkeley on Thursday. The students claimed to have circumvented a police order banning them from pitching tents at Sproul Plaza by simply using balloons to float the tents over the plaza. Up to 5,000 students were reported to have been involved in the Occupy protest before 20 tents were dismantled.
Students also set up mini-tents which look a lot like paperback books folded open, stem side up.  Given the fate of books in the hands of police at Liberty Square in New York City, this option will probably not survive.  In America these days, books are for trashing. 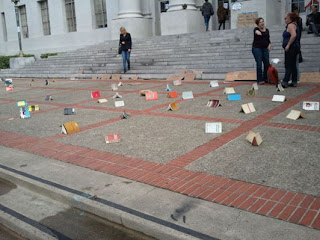