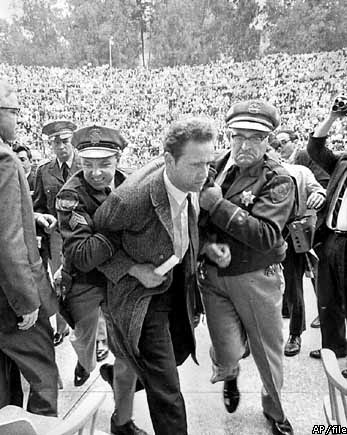 Mario Savio arrested in an attempt to speak at a
campus colloquium on The Free Speech Movement,
U.C. Berkeley, fall 1964


The plot thickens on the shutdown of my lecture on the "Qatsi" films of Godfrey Reggio and Philip Glass and the influence of Jacques Ellul upon their themes, a little talk scheduled for the conference of the Jacques Ellul Society at Carleton University this July.

The messages from the university spokespersons have gotten increasingly stern, schooling me on the fine points of intellectual property practice in Canada nowadays.  Below in total anonymity once again are the latest messages to me with other identifying information deleted as well.   None of the writers has asked for confidentiality on the content of the messages and their names will not be part of anything I write about this debacle.  Actually, they are all very fine people and I don't blame them for what's happened.

Dear .... If you read the law it is designed for creators...not just writers. Below is what the university has to say. Also, your interpretation of the writing situation isn't quite correct. Canadian copyright includes provisions concerning moral rights which aren’t concerned with lost revenue...but the right of a creator to have some control over where the creator’s work is used. As I understand it, this is one difference between Canada and the US. I demand that all my authors who use another author's work [quotes etc.] get permissions. What is interesting are the few cases where they are refused permission to use the work even if they are willing to pay. This typically occurs when one poet uses a small bit of another's work as an epigraph.  I’m sorry that this is upsetting to folks. This may be an issue of free speech, or it may be an issue of a creator’s right to have control of his/her work. If the person who wants to use the work knows the creator, as in this case, then there shouldn’t be any problem since the creator will give permission, no doubt. Moral rights may seem silly, but I know that many of my poets wouldn’t like to see bits of their poems on porn sites…even if the site host would pay. ....   Perhaps your suggestion is best, [name]... to just shift responsibility to you. This would require that the conference rather than [university unit X] be the host for the talk. Hopefully, my obviously absurd affronts and incompetence [in asking a simple question] won’t prevent Langdon from attending. .... Sorry about all the difficulties.

**********
[message from another campus person the email writers consulted]
Hi ...
Generally guest speakers are responsible for clearing the copyright of what they present. I can give you some general information about copyright.   One of the questions here would be the length of the film clips, and to ensure that no digital locks were broken in creating the clips.

Well, there you have it, folks.  Under the circumstances, I WON'T be going to Ottawa to give my talk. A lawyer friend and expert in the wiles of IP has now warned me about the troubles I might be getting into.  What interests me now is less the outcome of the current dispute, but something I've been wondering about for a long while, namely, the meaning of the beguiling term "intellectual property."

At this point it appears that at the national level there are legislators writing laws, bureaucrats crafting regulations, both probably responding to large corporations and trade associations that make sure their demands become part of a nation’s legal framework.  I imagine that at the university level there are lawyers who oversee which activities and resources are permissible on campus, advising academic departments and research units about the complicated conditions that now inform and constrain their inquiries.  At the end of the chain, I suspect, are timorous faculty required to observe the increasingly complex rituals of compliance that now comprise the center of academic life.  Hence, professors dutifully advise students to probe the key questions in sciences, the humanities and social sciences of the 21st century -- questions about the liabilities, law suits, insurance policies, restraining orders, and career threatening hazards their research entails.

“Great question, Professor Winner.  Of course you’ll have to check the extensive legal implications and entanglements entailed in peach consumption or, for that matter, even talking publicly about peaches. And oh, by the way, wasn’t that  “peach” line you just used taken from T.S. Eliot?   His property management firm has been up in arms recently, challenging our proposed “Waste Management Systems” logo as an infringement of their global “Wasteland” trademark.  They may lodge a complaint. So it’s probably wise to delete that “peach” reference altogether. It might be prudent to change your question to:  Do I have the requisite authorizations to taste a small portion of an avocado without obtaining permission from the avocado producers?  That might work, for a little while longer maybe."

In the months ahead I plan to do a lot more research, thinking and writing on these matters.  For the moment, my simple, perhaps overly naive questions are these:

2. Does the current regime of property protection buttress the unequal economic and political power of corporations and the wealthy few in world societies while seriously weakening the power of possible critics of the system of Techno-capitalism?  Answer: yes.

3. Were my own rights of academic freedom and political free speech undermined by the property protection measures that now govern “the life of the mind” in Canada?  Answer: yes.

4. Are scholars, scientists and their students now being enlisted as thought  police in today’s property protection rackets?  Answer: yes.

To all of this I would only add that I’m looking forward to celebrating the 50th anniversary of The Free Speech Movement in Berkeley 1964, an event that changed my life and thinking profoundly.  Back then it was pressure of a ham-fisted political kind that challenged free speech and academic integrity on the university campus.  Students and faculty resisted and eventually won.  Today the threats are more subtle, insidious and likely more destructive in the long run.  Alas, the “intellectuals” have become front line troops in the war to defend the citadels of global capital.

Intellectual property? Where the hell are the intellectuals? 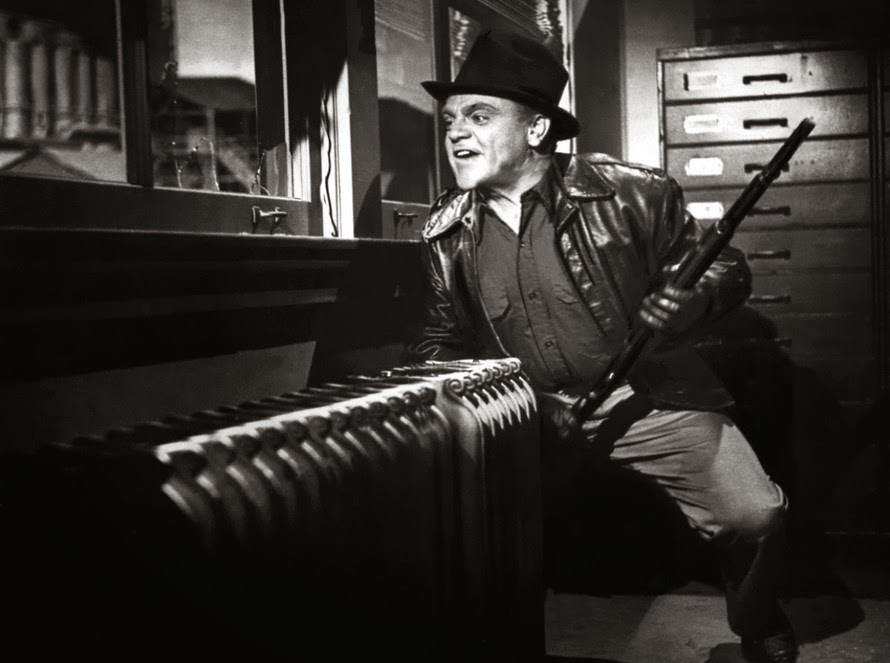 Stop Me Before I Lecture Again!

There I was working quietly in my study when suddenly ...

I've been invited to give a talk at conference of the Jacques Ellul Society in Ottawa this July 13-15.   It should be a wonderful event.  I'd planned to give an illustrated lecture, "The 'Qatsi' Films of Godfrey Reggio and Philip Glass," focusing upon the three films -- "Koyaanisqatsi," "Powaqqatsi," and "Naqoyqatsi" -- and the influence of Ellul's thinking upon their overall conception.  I've given the talk a couple of times before, using selected segments from DVD copies of the movies.  I offer my interpretation of the images and music, drawing upon key on themes in Ellul's writing.  The film clips are treated as, in effect, "texts" for philosophical discussion.

Alas, as I was making travel arrangements and checking on the technical details of my talk, a strange cloud gathered over the plans.  Below is the email exchange with names changed (to "Fred" and "Prof. Williams") to protect the two fine Canadian scholars who were unfortunately bearers of bad news from the Carleton University pettifoggers.

Just one further question. The university is very concerned with intellectual property rights. I'm assuming you have permissions to use the clips. In case someone asks, however, could you confirm. Thanks.
Cheers,
Fred

No, and I won't bother to get them.  I take this to be fair use for
scholarly purposes and public discussion.  I've given the talk
informally at conferences and on university campuses with no problem,
simply pulling out the clips from the DVD. The only thing I'm doing
differently here (as opposed the Wheaton College version) is to smooth
the transitions by editing segments into a flow easier to sequence with
my lecture remarks.  But if the bean counters are worried, the lecture
will have to be cancelled.

It that happens, it certainly will make a great story I can tell at a
conference on Free Libre Open Knowledge I'll be attending in Quito next
week.
Best wishes,
Langdon

Could be lights out.

See Fred's  message … and my response.


Hi Langdon,
I agree with your approach. This is a non-paying audience, and you are using clips to illustrate your points, not to act as a substitute for the films. In fact, your presentation can be expected to attract people to a film by the same film-makers. If I were Godfrey Reggio or Philip Glass I'd be very happy with what you are doing.


A request for permission may be interpreted as a request for permission to go beyond fair use, and if such permission is refused what do you do? If the idea was fair use from the start, why would you have to ask?
I hope this gets resolved quickly and in your (our) favour. The University's Film Studies department must have dealt with this question before and I could ask them about their practice.
Best,

I am looking into this. As I understand things, Canadian and US copyright law differ on fair use. When used in Canada, Canadian law applies. I don't want to have to deal with permissions, but the university insists that we are responsible for applying copyright.

I await the results with baited breath.  Meanwhile the story is already the source of great guffas among those preparing for the Summit on Free Libre Open Knowledge in Quito at which I'll be speaking next week.  Open Culture, Open Knowledge indeed!

Even if cleared for takeoff, I seriously doubt I'll attend the Ottawa conference after this absurd affront.

By the way, I receive a credit in the first of the Qatsi films and have known Reggio for decades.  I'm sure he'll be amused when he hears that I'm unable to describe, interpret and reflect upon his work in a free, public forum.

I will supply updates on this situation if the anything changes or if sanity breaks out.  This is the best (worst) personal experience I've had with the insidious consequences of "Intellectual Property" regimes for scholarship and public debate.

May 23, 2004:  Here are the latest points of clarification.  Evidently there is a new "Intellectual Property" law that has some noble purposes but with annoying consequences for the life of the mind.   I have edited the message below from the  pseudonymous "Professor Williams," excluding parts of the message that point to the person's identity.
* * * * * * *