Virtual War: We get 'em coming and going!

Although declining recruitment figures indicate that the tactic hasn't been working very well recently, the U.S. military has been using an sophisticated first person shooter video game, "America's Army," as a way to attract young men to sign up. Now it comes to light that video games are being used at the other end of the military experience, when soldiers leave the service and have to deal with the horrors of Post Traumatic Stress Disorder (PTSD). Here's the story from the increasing non-plused NPR on this new form of therapy. Note the Owellian title of the research firm involved.

"Using components from the popular game Full Spectrum Warrior, psychologist Skip Rizzo and his colleagues have fashioned a "virtual" world that simulates the sources of combat stress.

The project is a joint venture between the Institute for Creative Technologies -- a cutting-edge research lab at the University of Southern California -- and the Office of Naval Research. The object is to help veterans come to terms with what they've experienced in places like Iraq and Afghanistan by immersing vets in the sights and sounds of those theaters of battle.

The soldier being treated wears VR goggles and headphones. Using a tablet-based interface, a therapist can activate or remove the sounds of gunshots or the sight of smoke, depending on a patient's reaction. The idea is to re-introduce the patients to the experiences that triggered the trauma, gradually, until the memory no longer incapacitates them.

Eventually, Rizzo believes the therapy will include other stimuli, such as vibrations to simulate the impact of bombs or rumbling of tanks, and even the smells of war -- the body odor, garbage and spices of urban combat, for example. 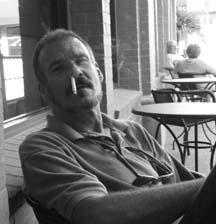 He was the most intense person I've ever known, someone who could talk with you for hours and hours on end about an amazingly wide range of topics -- music, philosophy, religion, politics, you name it. In my home town of San Luis Obispo, California, Chris Gibson became a local character, a friend to many who visited his "office hours" outside the downtown Starbucks, enjoying his insights and incisive wit.

When I met him in the late 1960s Chris was recovering from a serious motor cycle acident. He was fascinated by the equisite clarity of Wittgenstein's philosophy and the pure sound of the classic tracker pipe organs, especially the way Helmut Walcha played J.S. Bach organ concertos. He hoped to travel to Europe to become an organ craftsman, a quest for spritual and practical fulfillment that was, alas, never realized. Instead, Chris worked as a fisherman in Alaska, carpenter in Central California, groundskeeper, and occasional writer of unpublished pieces roughly in the vein of Bukowski, but even more direct and brutally honest. Perhaps he should be remembered as the godfather of nanotechnology, for his Bullshit Detector was sensitive right down to the smallest, sub-molecular particle.

Chris Gibson died in a freak accident in Cayucos on July 26. Jeff McMahon has written a fine tribute to Chris in Contrary Magazine. The same issue contains a piece of Gibson's writing, "The Wages of Insomnia," which he described as follows:

"Remember that I wrote that thing without any sleep and it does have something to say but be forewarned that there is also a strong sense of beating a bush with a stick to prove you can't go around it in there."

(The photo above was taken by Sevastian Roberts a day or so before Chris died.)

A truly democratic technology in action

Using digital cameras and streaming video on the Internet, one of the participants prepared a portrait of the situation at Camp Casey near Crawford, Texas, where supporters of Cindy Sheehan have gathered. The whole video is about a half hour long.

This sure as hell beats the nattering cynicism of the cable TV coverage and commentary about this event. Are we seeing a contemporary Peace Woodstock of sorts?
Posted by Langdon at Saturday, August 13, 2005 1 comment:

Parents speak out on (the latest) war

Cindy Sheehan’s vigil in Crawford, Texas renews questions about why America has gone to war in Iraq. Her son, Casey, 24, was killed in combat in Baghdad in April 2004. Sheehan’s requests for an audience with George W. Bush to discuss the purposes of the American occupation have been rebuffed the President and administration officials.

The story reminds me of an experience from my past. Working as a student intern at the Pentagon during the summer of 1967, I took a lunch break to watch a ceremony presenting a Congressional Medal of Honor posthumously to a Vietnam War soldier who had died heroically in battle. Two military bands played, including one in Revolutionary War costume, and cannons fired several volleys. Civilian and military bigwigs gathered on the steps of the fortress to drone their solemn speeches. The father of the young man received the medal, thanking the government officials for recognizing his son’s valor. Much to their chagrin, however, he added that he was not certain his son had died for a good cause. As I recall, he spoke with Congressmen about his doubts later that afternoon. His comments brought a storm of controversy in the press and on television. The country was just then beginning to wonder whether or not the war and its costs were justified.

Have we reached a similar turning point in public sentiments about Iraq?
Posted by Langdon at Monday, August 08, 2005 1 comment:

In the grand tradition of hoaxes and spoofs, a field of excellence that holds a special place in the heart of this Masked Marauder and Automatic Professor, there has been an interesting breakthrough. Three graduate students at MIT submitted a paper to a computer science conference, one randomly generated by a computer program. Here are excerpts from The Chronicle of Higher Education story by Andrea L. Foster, "Students Whose Phony Paper Brought a Conference Invitation Are Stars of Their Own Video."

"Three Massachusetts Institute of Technology graduate students attracted a flurry of media attention in April after a questionable academic conference accepted their randomly-generated, nonsensical paper. Now the students are stars of a lighthearted video they made when they went to the conference even though their invitations had been withdrawn.

"The three -- Jeremy A. Stribling, Maxwell Krohn, and Daniel Aguayo -- are computer-science students studying parallel and distributed operating systems. The organizer of the conference, called the Ninth World Multi-Conference on Systemics, Cybernetics, and Informatics, had initially invited them to attend after accepting their phony paper, which was titled "Rooter: A Methodology for the Typical Unification of Access Points and Redundancy."

".... During their technical session, the students filmed themselves presenting three meaningless, jargon-laden papers written by the computer program they had created. For additional verisimilitude, the students assumed fake names and donned wigs and mustaches while each presenting one of the three papers. The papers were "Harnessing Byzantine Fault Tolerance Using Classical Theory," "Synthesizing Checksums and Lambda Calculus Using Jog," and "On the Study of the Ethernet.""

* * * *
Here's a site where you can download the video of the session, complete with a lachrymose musical soundtrack. The quality is right up there with the Yes Men satires. Alas, the link to the story is short term because the Chronicle requires subcriptions.
Posted by Langdon at Monday, August 01, 2005 5 comments: